Charlie’s Chili Rellenos – Great Recipe for a Bit of Mexico – 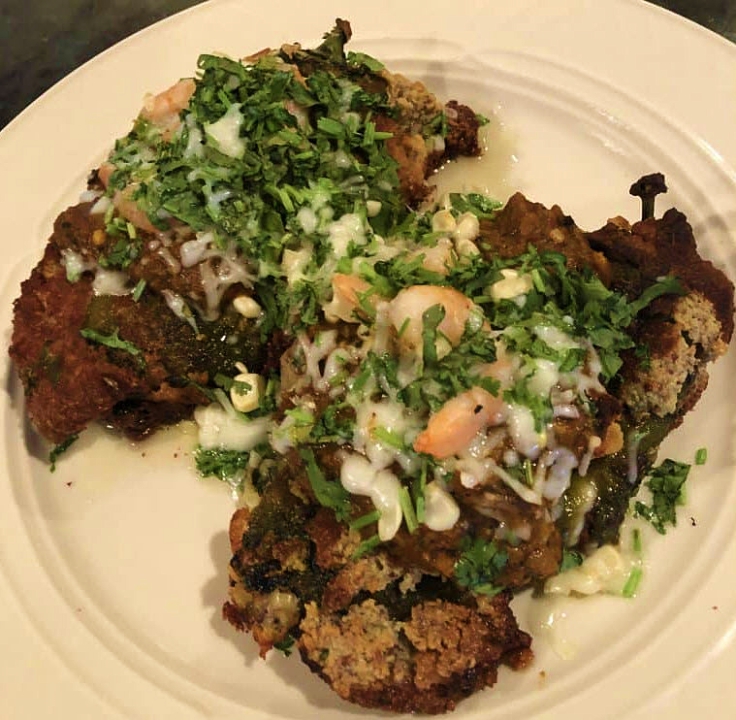 The juice of 4 fresh limes (microwave each for 25 seconds, to make them easy to juice).

1 ear of white corn (shaved off the cobb)

Pepper prep. Turn a gas burner on high. Char the peppers on the burner grate, turning with tongs, until blackened all over. They can also be charred under the broiler. Regardless of method, peppers need to be burnt BLACK. Transfer the charred peppers to a heavy-duty, resealable plastic bag and close. Let stand 10 minutes. The chiles will steam in the bag, making them soft and easy to peel.

Remove the skin. Taking peppers out of the bag, gently rub them with paper towels to remove as much charred skin as possible. It’s OK if a few flecks remain – they’ll add flavor, so don’t rinse them off.

Carefully open the peppers. Using a paring knife, make a slit across the top of each pepper just below the stem, leaving the stem intact. Starting from the middle of the slit, slice lengthwise down to the tip of the pepper, cutting through only one side. Think of it as a zipper in a sleeping bag. Open the pepper like a book and pull out the seeds and inner membranes. You may need to use a paring knife to loosen the top of the seed pod. Repeat with the remaining pepper.

Prepare the sauce. My sauce preparation is broiled at 450 degrees F. In a 12-inch broiling pan, place two of the Pasilla peppers, plumb tomatoes, white onion, and garlic, all rough chopped; 1 tablespoon olive oil, sea salt and pepper, oregano and half of the cilantro. Mix all together and place in preheated oven for 30 to 45 minutes or until charred almost 3/4 black. Yes, I am giving you permission to burn the mixture because in this prep, burnt is good. After you get the desired cooked texture, pull out of the oven and set aside to cool, approximately 45 minutes. After cooling, place in a food processor adding the lime juice and 2 tablespoons of water. Pulsate until you have a smooth sauce, then adjust the salt to taste. Place sauce in a sauce pan to heat for the final finish to the chili rellenos .

Chili Rellenos. Mix together the grated cheese, shrimp, corn and 1/4 cup of the cilantro. Fill each pepper with about 1/4 cup cheese mixture. Fold in the sides to cover the filling, then thread two toothpicks across the seam to form an X. You will probably need to make a second toothpick X to secure each pepper so the filling doesn’t leak out when frying.

Mix the batter. Beat the egg whites with a mixer on high speed until soft peaks form. Add the egg yolk and beat 3 more minutes.

Dredge. Pour the Panko bread crumbs into a shallow dish and season with salt and pepper. One at a time, coat the stuffed chile.

Batter. Holding each pepper by the stem, lower it into the egg batter to cover completely. Let any excess batter drip off.

Fry. Add the pepper to the hot oil, 1 or 2 at a time; fry, flipping once with tongs, until golden, 1 to 2 minutes per side. Drain on paper towels.

Then place in a baking pan one at a time with a paper towel to help drain excess oil. When all are done frying, place in the oven for about 15 minutes.

THEN Eat! Place a fried pepper on each plate, pouring the warm sauce over it. Garnish with Queso Fresca and cilantro. Serve immediately. You might want to serve with salad or beans or both.

NOTE: The Fox has just released a Mexican-style beer – Más Equis Mexican Lager – a perfect pairing or go to Showtree Brewing Co., and pick up a growler of whatever they recommend.

Have Chef Charlie Prepare this @ Your Home… 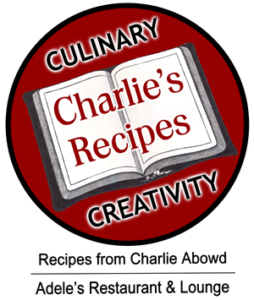